In the midst of spending countless hours reading applications for students, clients and admissions, I think I forgot about this obligation that is blogging.

I was working with a client the other day with brainstorming and writing the many personal statements needed for the many schools to which she was applying. The writing prompts were so exciting for this young thirty-something year old but not to her. She showed me her list of prompts with a blank stare and words of defeat. Slowly, and after many questions posed by me in the process, we were able to tackle the list of prompts that included her writing more about herself and philosophical perspectives.

One question posed from a top school seemed a bit easier to work through; it asked the applicant to write about a time that they learned something about themselves that they did not expect to learn. Seems a bit introspective, right? For many people, this question is at the heart of psychotherapy and discovered after many hours (and dollars) of therapy.

This particular topic got me thinking about myself and about what I learn every day in my profession. In addition to my day job, I train high school students to complete the Los Angeles marathon with a program called Students Run Los Angeles.

Yes, I have run a marathon. Several times.

Thinking about this supplemental college application questions in my own life, I got to thinking about how running with these young people has changed me not only as an educator, but as a human being and as a marathoner.

I realized this last week as I sat in a marathon leader meeting with over fifty other leaders (educators-turned-marathoners) from across Los Angeles. The SRLA coordinator was speaking to us about the upcoming half marathon. Our 3,000 students would be running with many other community runners and our student runners needed to put into practice the many lectures pertaining to “Runner’s Etiquette” that have been instilled since the beginning of the season. He went on to mention that there have been complaints in the past to race directors about the challenges with having students run the races with other community runners.

My biggest challenge on the course whilst running was weaving through runners along narrow (and sometimes not so narrow) running paths. Runners were socializing and running in “walls” or groups of more than four or five runners wide, making it incredibly challenging for others to pass. They walked through the water stations and one runner dumped half of her water out nearly splashing my shoes. Walkers chose to walk right in the middle of a narrow path rather than walk to the right (as is proper running etiquette).

I thought of my kids. I thought about how much I drill into their fast-paced teenage heads that they cannot run in groups because it blocks other runners. I drill into their head about running sans both earbuds in their ears so they can hear other runners on the course (they know the routine as I run by with my “one ear!” statement while pointing to my one bud-less ear).

I remember how frequently I remind the young people at the beginning of the season to walk to the right during our runs if they choose to take a break on the course. I think about how less frequently I need to say it and how more frequently I say “thank you for walking to the right” as we approach marathon day. I remember how often I hear “thank you” from my runners to police officers blocking the roads from cars, or to volunteers at water stations on race day or to parents out with us during practice.

Training for a marathon changes everything about a person, from eating habits to goal setting, from perspective to humor. The teenager in September will be an incredibly different person in March. They complete 26.2 miles, a feat not accomplished by more than 1% of the U.S. population and yet these young people are not quite welcomed into the runners community and I wonder why.

It’s because they are teenagers. Not everyone likes teenagers. Frankly, many people are just annoyed with the immaturity, the lack of impulse control and the fact that they don’t always have their shit together.  Working with teenagers takes patience.

They are in complete learning mode, even if it is at a starting line for a marathon. Teenagers absorb everything, they eat up compliments, love the support and get hurt/defensive when adults (or their peers) are mean to them.

And they screw up. A lot.

I have to remember how much I screwed up in high school in order to be a bit empathetic. It takes a while to dig into the memories but I sometimes have to.

I wonder if other adult marathoners wonder about the progression these young people have made in their lives in order to get to that starting line. I contemplate if the adults can comprehend the adrenaline running through these young students already pumped bodies as they stand in line with the thousands of other runners. Drastic changes have been made in diet, life choices, training expectations, study habits and friendships, just because running a marathon is now so attainable to them.

They are teenagers. Imagine the growth potential after this feat! 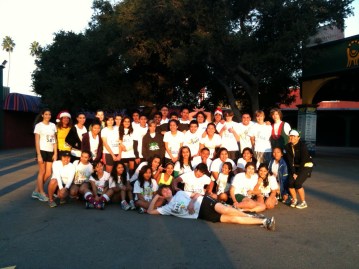 One of my students still has no idea what he wants to do with his life. He’s a junior in high school. He loves to run and loves Biology. He knows he can run a marathon. He somehow wants to incorporate these things into the rest of his life. Running the marathon for the first time last year changed his life. It changed his entire family’s life. He marches forward, okay with the uncertainty of his future but knowing that it will work out. He is one of my thirty-nine this year. And one of over 100 runners I have worked with through SRLA in the last six years.

Running the LA marathon alone for the first time was an experience. Running with these young people has transformed me. I want to be better. I want to eat healthier. I want to treat people better. These teenagers watch my every move. They learn from me. They learn how to say “excuse me” to pedestrians and how to say “good morning” to the couple walking their dog along the same street we are running on. They wave an appreciative hand to the car that yields to them in the cross walk.

I want to know as much as possible about running to share with these young people. I want to perfect my running form because it’s what I expect from my runners. They take everything in from training like a sponge and speak a mile a minute to their parents and adults about workouts, how sore they are from practice or how many miles they completed on Sunday morning. They walk the halls of school with a newfound sense of confidence after another set of miles has been logged into their training journal.

They are part of the running community now just as much as I am. These young people are hungry for more running and they are just as serious about marathon training as the adults I know in the community. They yearn to better their performance and to better their life. They seek to learn more and I am so excited to teach them because we are part of that exclusive marathoners “club.” It’s my responsibility as an adult to be this source of education for young people outside the confines of a school. These young people are not born with the tools to succeed or the confidence to become great. It’s a learned skill. If I’m not helping them learn how to be a better person, who will.

I never realized how much this program has changed my life until last week when my two worlds collided in my head. Who would have thought that a prompt for a personal statement on someone else’s college application would inspire me to think and write about the unexpected learning about myself?

I now ask you, can you think of a time where you learned something from a place or person that you were not expecting?